The Man in Commando? 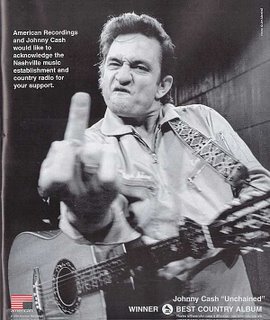 According to Stacy Harris' column, the Man in Black didn't wear underwear. Now there's a mental picture I didn't want.

Stacy's source of information is a book by longtime Cash/Carter employee, Peggy Knight, who was unceremoniously canned not long after June died. The firing was reportedly done by John Carter Cash.

Peggy went to work for the Cashes after she had befriended Mother Maybelle Carter at a bingo hall in Madison back in the late 60's. She cared for Maybelle and her husband, Ezra, during their final illnesses. Peggy stayed on at the Cash Place, acting as a personal assistant type of figure, traveling with them and just being around for about 30 years.

I sure hope she didn't do Johnny's laundering.
Posted by Sharon Collie at 5:29 PM

Being a huge Johnny Cash fan, that picture has always made me laugh.
And yes, I did the Cash exhibit at the Hall of Shame.
Never got in the Elvis car though.
You have that honor alone.

Best. Picture. Ever. A music-photograpy watershed moment and a fitting salute to every business in the world who ever said to one of its creators something like "People don't want to hear this stuff, they wanna hear a Johnny Cash rekkirt. You know. Trains and heartache and tsih like that. Now go'on back and make me a Johnny Cash rekkirt."