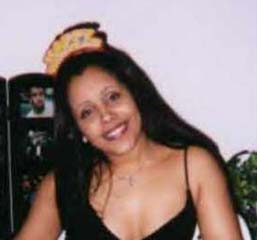 Jenine Gonzalez was 5 days away from her 28th birthday on September 11, 2001. Jenine got up and went to work that beautiful, September morning, to the 102nd floor of the South Tower to her job as an executive assistant at the Aon Corporation, never dreaming the horror that would ensue a little before 9:00. She probably had gotten some coffee or chatted with co-workers about what they had done the night before, settling in to begin the day.

2001 had not been an easy year for Jenine and her family. In February, her mother had died after fighting cancer for a long time. Her favorite singer Aaliyah had been killed in a plane crash in August.

Things had begun to look up though. In the spring, Jenine had gone full time at Aon Corporation after working there as a temp for awhile. She celebrated her new job by taking her grandmother, who had raised her, for a Mother's Day cruise around Manhattan.

Jenine had other dreams besides being an executive assistant at Aon. She had dreams of having her own business. Because she loved music so much, Jenine wanted to become an events coordinator/promoter, specifically for Latin and Hip-Hop groups. Jenine would read every book she could get her hands on, attended seminars and sought out party planners and band managers to pick their brains.

Everything I've read on Jenine, there is a common thread running through descriptions of her by those who knew and loved her: Her relentlessly positive attitude, she loved to laugh, and she always made you feel good.

I am so humbled to attempt to honor Jenine today by taking part in the 2996 Project. I know her family is remembering and missing her today as they do everyday. My thoughts and prayers are with all of the families of the victims, but, I'm grateful to have a face and name to specifically remember today.

Posted by Sharon Collie at 4:42 PM

You were so special to me and to your family at 78. I was blessed to have you as my student 2 years in row. I have dedicated my third book to you and to the memory of those who lost loved ones because of the cruelty and ignorance of others. We need to stand together and understand the differences that make each and everyone of us special. Fran Lewis Jenine's 5th and 6th grade teacher.
If we all joined hands by fran lewis

Instead we would all pray that one day we could live in a world you know
Free of strife, wars and dissention and people that whose understanding would grow
To see the world as it really is with so many people in it who care
To join their hands and show that our world is special beyond compare.


If It Could Only Happen: I Don’t Think So

Getting along with other countries and each other would be the best
Giving our President to deal with important issues like the economy, health care, education, and the rest

Unfortunately, this is not going to happen in our lifetime or I think probably never I am sure that is true
But, we can dream and hope that our children and theirs will see it and live in a better world than you and me.


I dedicate these poems to you and your family. Fran Lewis